Hunger Games - Catching Fire - Do People Get the Social Message?

I was talking with my son about the popularity of the Hunger Games trilogy and the topic came round to the underlying social message of the stories. That lead to the question, do people who take in the entertainment value of the story see the parallels in the real world?

Take the set up of the twelve districts, all being raped for the glory of the Capital. Well, this one is easy right?

I'm sure everyone can see the first world lifestyle wrapped up in the Capital with the third world suffering to keep up with the first world consumption. Third world starves and we continue to consume without a thought of where our food, clothes, and items come from.

What about cleaning up those select few and then parading them out to the Capital before they send them back to the squaller of their districts to live in the Victor's Village?

It's really blatant contrast of how the two different societies live in PanAm. We do it here too.

We take those whose stories touch our hearts, clean them up, parade them through the media and then send them right back to their slums in the third world. Don't think we do? Take the kids from SlumDog Millionaire. They got a taste of what celebrity in the first world feels like and then were sent back to their homes in the slums of India. Are they better off for it? Or now that they know how we live, feel cheated? How would you feel?

Then there is the 10 year old girl, Nujood Ali,  who faced down her society and got a divorce from her much older husband, who bought her from her family. We put her on talk shows, showed her a life she can never have, and then sent her back to the family who sold her in the first place.

We are doing it again with Malala Yousafzai, but at least she doesn't have to go back to a slum.

Then there is the killing each other to entertain the Capital.

Yes we do this too, with our reality TV shows, but also in our news reports on the wars. We watch the TV, see the terrible images, hear the heartbreaking stories and then we turn the TV off and forget. We can do nothing so why bother. They are 'other' - over there, someone else. They have nothing to do with us. Yet, it is our governments and our economy that effect their way of life and move the chess pieces into place. In the 80's the US backed the Taliban, put them in power, knowing full well how it would effect the citizens there. The US leaders are there because their citizens vote them it.


As a thanks for coming by and reading this post -
I'm giving away a free download of the e-book  - Thirteen by Shannon Peel. 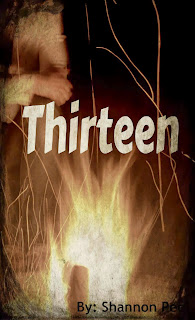 Jack is a rebellious thirteen year old boy, who just wants to hang out with his new high school friends, but his mom’s curfew is restricting his freedom.

When foreign soldiers invade his hometown, cutting off the power, communications, and any chance of escape, Jack and his friends have to figure out how to survive.

With no way to contact his father, they have no idea if he is safe or one of the people disappearing from their homes. Now all Jack wants is to get his dad back, unfortunately, armed soldiers are in the way.

Thirteen is a roller coaster of twists and turns. It is a story of a boy figuring out who he is and redefining his relationship with his mother. To protect his mom, he puts himself into dangerous situations and organizes a group of kids to brain storm ideas and gather information on the soldiers.