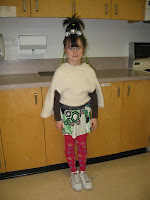 It's that time of year - Christmas performances! In Calgary we didn't have too much of a time commitment for performances because the kids schools didn't do anything overly involved during this time of year. My daughter's school had too many kids to do a play so they just stood up and sang songs. My son's school had a major production in the spring so Christmas was quiet. In BC their school is smaller and as a result they are putting on some major productions, add that to my husband's professional performing family we have lots to go and see.

I wasn't looking forward to my son's performance, 3 schools singing environmental songs with some musicians for a benefit. The marketing for the benefit was pure genius - include kids and their parents will buy the tickets, no further advertising necessary. How good could this be with a marketing plan like that? I didn't think it would be anything too special, just another evening watching my child amongst hundreds of others singing songs - bin there done that. I was surprised to find out that my assumption was completely wrong! It was a wonderful and amazing experience, the venue was top notch, the musicians were world class and the show they put on with the kids was professional and full of energy. My son was very fortunate to be able to work with these professional musicians and be part of such a large professional production.

Two nights later we found ourselves at another Christmas production listening to my husband's aunt belt out original songs and traditional Christmas favorites while his grandmother played the piano. They were performing with his aunt's musical group, August. The evening was a real treat, filled with amazing original songs and humour. We watched his aunt perform in Calgary when she was touring as the bass player for other musicians, however, this was the first time we saw her sing her own songs and they were all absolutely wonderful. Living here has its benefits! 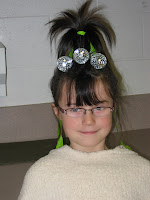 The next production is a little more labour intensive for me. My daughter is performing in her school's play, The Grinch. She auditioned for a part but didn't get it, I was so proud of how she handled the disappointment and is stepping into her role as a 'who.' I now have to make her costume, which I have no idea how to do. This should be fun!

What I've come to realize these last few days is that we don't take in enough of local cultural productions and events. The kids get more out of watching performances and taking in art then they do watching a movie at the cineplex. It's time we got them out more to the theater and other quality shows that leave us feeling like we actually got value for our money, unlike most movies at the local cineplex.