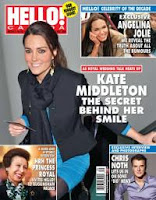 Watch out at the supermarket for the next issue of 'Hello' Canada Magazine. They have named Angelina Jolie the Celebrity of the decade and the article will reveal more about her REAL life with Brad Pitt.

I like the Hello Magazine, not just because its a Canadian publication, but because its not a rag filled with sensational lies and half truths.

Either way if any celebrity deserves the title of celebrity of the decade, it would be Angelina. She's been in the headlines helping people, adopting 3 children, getting married and divorced, involved in a highly visual marital break up and then going on to be 1/2 of the most powerful couple in Hollywood. Not to mention giving birth to 3 beautiful children. Then careerwise she's won an oscar, played the leading lady in a vast number of blockbusters, and has emerged an icon of action and drama. Is there any other celebrity that has done so much in 10 years?