New Puppy = No Sleep. Who's Bright Ideas was This Puppy thing Anyway? 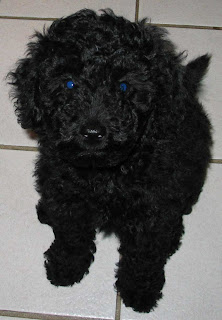 Puppies, who's bright idea was it to get one?  Oh ya mine.  What was I thinking?  I thought getting a dog would be simple, it was not.  I thought everyone would help out, I was wrong.  I thought it would be a great thing for the kids, I was right.  It may be more work then I thought but seeing the kids play with the puppy instead of sitting in front of the TV is worth it.

When we first went to the breeders to meet the little guy he was so cute and playful. Just a tiny bundle of fur running after the kids on the lawn. The 2 week wait until we could take him home was killing the kids, to be honest it was hard for me too. Everyone was so excited and impatient we ended up getting him one day early. That was the beginning of the end for me. The next day I had to go pick up my mom from the airport and I didn't know what to do with him. He'd never been in a kennel and I didn't want him to be running around the room on his own. I finally decided to leave him in the kennel and hope the experience didn't make kennel training any harder then it was going to be. I couldn't believe that I cared he would be sad in his kennel.

Sure he's a cute and lovable bundle of black fur with the sweetest little puppy eyes that burn into your soul but could he please sleep.  I need my sleep, consistently.  Trying to get him to stop whining and to sleep in his new home was a flashback to my kids baby years.  Getting up in the middle of the night to let him out to go "potty" is better than having to change a messy diaper but the interruption in sleep can be taxing.  The result of all this missed sleep? Irritability which lead to fighting with everyone.   I have not been the easiest person to live with this past week.  My family should have been more understanding but obviously that would be asking too much.
My husband and daughter have all these rules when it comes to the puppy's care and worry about every little thing.  The dog's shampoo is more expensive then mine, now that's pathetic.  What to feed the dog was a whole other issue, lets just say I have an easier time feeding the kids.  Heaven forbid I even think about giving the dog something without first having a discussion based on scientific research.  My daughter panics if I'm not paying attention to everything the puppy does and allow him to chew on a cardboard box or two. You'd think that with all the rules and demands these two have, they'd be picking up some of the slack.  I could only be so lucky.
The amount of attention the kids give the little guy isn't enough but when they do pay attention to the little guy it is heart warming. The first day they fought over who got to play with him, by the third day I couldn't get either of them to do anything with him.  At least until I threatened to send him back to the breeder, then they were front and center to help out.  I love to watch them play with him and take him for a walk.  If anything this new addition to our family has us outside more then ever before.  I may be his main caregiver but I won't be his favorite one for long.   I may wonder what I got myself into and if its worth all the extra effort but when I'm honest with myself I'd have to say 'yes'.  I mean who could say 'no' to a face like his.
0 comments