When we built our cookie cutter home in 2000 I requested the bathroom and laundry rooms to be moved to make the kitchen bigger. What I didn't think of and so wish I had was the location of the stairs. Our stairs are right at the front door and there are always shoes and bags at the bottom. It drives me nuts! The next house we buy will NOT have the stairs located at the front door, what a dumb place to put them.

What do you hate about your home's layout? What could the designer have done better? 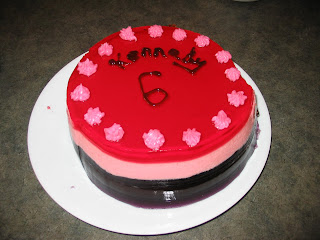 I used to serve the traditional birthday cake at kids birthday parties and end up throwing out lots of half eaten pieces. At my daughter's 3rd birthday and my son's 6th birthday party I learned a valuable lesson about birthday cake -- if its made out of ice cream or jello there will be no birthday cake left on the plate.

A jello birthday cake is really easy to make and very good.

Make Jello as directed and add the 2 KNOX unflavored Gelatin pkg. dissolve in hot water with the Jello and then add the cold water.

Fill cake pan with the liquid and set in the fridge until hard.

Run hot water into sink (with stopper) and dip the cake pan in for a few seconds. Turn upside down onto a plate and put into the fridge until time to serve. Just before its time to serve decorate with icing.

Cut with a knife -- Can be eaten with fingers or fork. 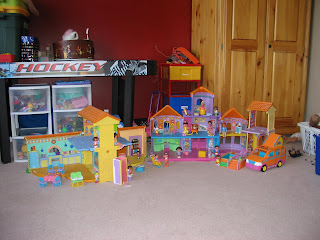 Since we are trying to down size I need to sell off stuff, toys being the number one item on the list. I just finished packing up all her Dora the Explorer Toys and I've had to say good bye to my Dora.

She wanted everything Dora, then we she met Dora the Explorer at Universal Studio's Florida. She followed Dora around for a long time, we took lots of pictures of our Dora the Explorer with the real Dora the Explorer. On her 5th birthday, after we had arrived home, Dora the Explorer called her to say "Happy Birthday" and every little girl was impressed. We booked the call through www.nickjr.com and it cost only a few dollars. The company that handled these calls was uvox. You can send emails from Dora the Explorer to the birthday child via nickjr.com, but the phone call option seems to have disappeared. If they did cancel it it is too bad because it was worth it to see her eyes open wide and her jaw drop as she heard Dora saying "Happy Birthday."

Now she loves Hannah Montana and I'm pricing all her Dora the Explorer toys for sale. Time is flying by and she is getting bigger so fast. I love her so much and I try to remember when she's bugging me for this thing or that thing -- soon she won't need me at all. She's getting to be a little tween dancing and singing to Hannah Montana's CDs and the Dora the Explorer posters are replaced with Hannah Montana's face. I'll always miss my Dora but I'm also looking forward to getting to know my little Hannah.

Today we went bowling, something I haven't done in a long time. Bowling is a great family activity and the best part, it's affordable. It cost $20.00 for the 4 of us to bowl one game and it took us an hour.

It was my son and I vrs. my husband and my daughter. I got 3 strikes so we won!!!

Bowling might sound like a boring blue collar thing to do, but it is lots of fun. The most important part about any family activity is that you do something on a regular basis. The more different activities you have at your disposal the more fun it will be for every member of the family to participate.
0 comments

Parenting Siblings is not Easy - Is Your Parenting Causing Sibling Rivalry?

Avoiding sibling rivalry is not easy and impossible to do but there are things parents can do to mitigate the rivalry. Life is full of stress and full of demands and when one child demands a parents time more than the other child or one child is more intelligent and understanding it can be simpler to take the easy way out.

To illustrate what I'm talking about I will use a Reba episode or group of episodes. Specifically the episodes where Kyra decides to move in with her dad because she feels like she's at the bottom of the totum pole at her moms house.

Reba chooses to bail out Cheyanne because she'll loose her daycare if she doesn't make up the dropped courses. She feels guilty and when Kyra is so understanding she feels let off the hook. However, Kyra actually feels like she's got the short end of the stick again and decides that there really is no place for her at her mothers house.

Has this ever happened to you? Either as a sibling or as a parent?

I have to watch what I do because my daughter is very demanding of time, attention, and stuff. My son is quieter and more internal with his feelings and his problems. He is very intelligent and understanding about life and choices that need to be made by us. He sometimes feels like his sister is more loved and favored by other members of the family - this is not true but I can see how he'd feel that way. His sister is younger, cute, helpful, loud and outgoing. He is quiet and intellectual, an adult needs to make an effort to spend one on one time with him because he'll sit back and wait. If the adult doesn't take the initiative he'll understand and internalize his feelings.

The ultimate result if I let things run their course and not make decisions to pay special attention to him - sibling rivalry. He will start to blame his sister and resent her favored status in the family. Taking an hour to sit down and talk with him and ask him questions to create a plan of action to include him is nothing. He's more important than any time I'd spend watching TV, cleaning the house, surfing the net or spending time with my nose in a book.

The consequences of our parenting decisions have further reaching effects then we understand. Choosing the easy way, the path of least resistance may create a home that is more of a war zone then a place of love.