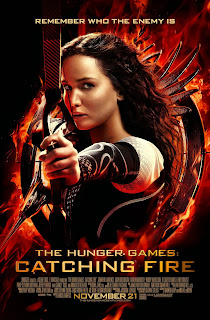 I took my daughter to the opening day of the new Hunger Games movie - Catching Fire. Got there for the 7:30 showing half an hour early and the theatre was packed and the only seats available were at the front. So, I exchanged the tickets for the 9:45 showing and we sat for over an hour in line to get our seats in the Theatre and we weren't the first in line.

We were both disappointed with the movie.

She thought it focused too much on the killing and found it scary, which considering she's watched the first movie and read the books, really says something. I thought it skimmed over the whole book so fast that it didn't really get into the story. Instead showing you the highlights and never really enabling the viewer to 'feel' or get into the character's struggles. They really should have split the book into two movies, it would have done the franchise more in the end.

It skipped through the first half of the book so fast, they should of just not done it. It spend too much time in the arena fighting and not enough time developing the new characters and their relationship with Katniss and Peta. Some of the important character details of the story were inserted so quickly, it was easy to miss them. Since the pace of the story was so fast, scenes like the wedding dress lost their impact.

The acting was great. The special effects impressive and the sets amazing. The issue was in the pacing and the story. Not enough characterization or tension. Had they split the movie into two and focused on the 12 district tour instead of the new games, they would have had a better story. They would have been able to develop the relationship between Katniss and Peta better, they would have been able to show the effects of the brutal new guard better, they could have shown more of Katniss' relationship to Prim and her mom. Then people would have cared more for the characters on the screen and identified them to the characters they read in the books.

I just wasn't all that impressed and neither was my daughter. Should have just waited for the digital edition on Netflix.

As a thanks for coming by and reading this post - I'm giving away a free download of the e-book Thirteen by Shannon Peel.


Jack is a rebellious thirteen year old boy, who just wants to hang out with his new high school friends, but his mom’s curfew is restricting his freedom. When foreign soldiers invade his hometown, cutting off the power, communications, and any chance of escape, Jack and his friends have to figure out how to survive. With no way to contact his father, they have no idea if he is safe or one of the people disappearing from their homes. Now all Jack wants is to get his dad back, unfortunately, armed soldiers are in the way.

Thirteen is a roller coaster of twists and turns. It is a story of a boy figuring out who he is and redefining his relationship with his mother. To protect his mom, he puts himself into dangerous situations and organizes a group of kids to brain storm ideas and gather information on the soldiers.